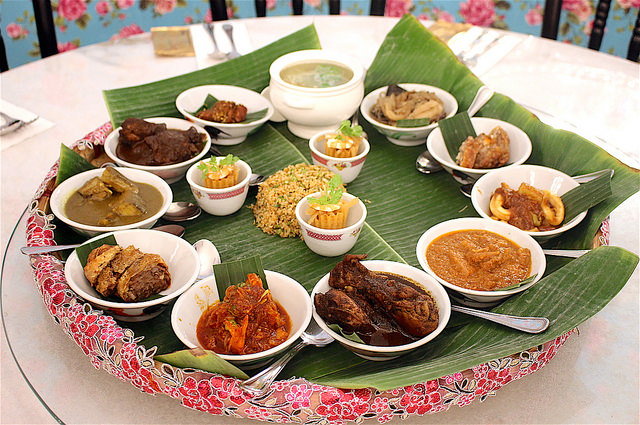 The buzz is on about “The Peranakan” that just opened at Claymore Connect (Orchard Hotel’s shopping arcade revamped into a sparkling new mini mall). Chef Raymond Khoo who has had 30 years experience in F&B came out of retirement to do Peranakan cuisine using his mother’s and godmother’s recipes. I was really curious because there aren’t that many good Peranakan restaurants around anymore. Some have gone downhill, and others have had to add in non-Peranakan dishes to draw customers who aren’t used to Peranakan flavours. What’s authentic is hard to gauge, as every Peranakan family has their own variation that they swear by. Babas and bibiks are known to be fiercely critical of commercial attempts at their heritage food, “My grandma/grandaunt/aunt/mom/cousin makes the best (insert name of dish); this one is terrible! We should just eat this at home, so much better…” I’m not Peranakan and didn’t grow up with the food so I had to rely on those who did – my friend Belinda who brought me here. She has tastebuds quite similar to mine too, so that’s a bonus. But firstly, take a look at the decor that everyone is gushing about. It is OTT over-the-top chinois chic! It’s bold and bright, with colourful wallpaper, opulent screens, shiny decorative mirrors and chandeliers galore. Raymond designed the decor himself, to reflect the personality that Peranakan food is known for – bold and intense flavours. But despite the setting, the food is remarkably well-priced with most vegetables at S$12, meats at S$17-19 and seafood below S$30. Desserts are mostly S$3-5! First thing we had to test? The sambal belachan – the mark of how good a Peranakan restaurant is. Oh, this thing kicks ass. Be warned: it is extremely spicy but you won’t be able to resist shovelling more into your food. The belachan is not overpowering but lends a nice smoky umami hit. My mouth is watering at the memory while typing this. We began with the Kueh Pie Tee Set (S$20) which comes so beautifully presented on a congkak board: braised turnip, shrimp and coriander go into perfectly crisp “top hats” and decorated with the homemade cili cuka (vinegar chilli) and sweet sauce. It’s always fun to make your own. I loved the cili cuka, and I wished there was more servings to eat it with. Actually I wound up just taking the leftover turnip and dressing it with the chilli. Yums. The Peranakan also has Tok Panjang Feasts (S$45/65 per set, inclusive of dessert and coffee/tea) which harken back to the days when an array of specialty dishes were laid out on long tables for honoured guests or special occasions. Raymond customised ours to showcase dishes that are not commonly seen: * Sotong Masak Asam (tamarind squid with “belimbing” or starfruit) * Satay Babi Sum Chan (skewerless satay using fatty pork belly) * Ayam Sio (normally this is done with “itek” or duck, but this is with chicken, simmered with coriander and palm sugar) * Kuah Lada Ikan (stingray in pepper stew) * Nasi Ulam (cold rice mixed with a chopped herb salad). There’s also a fairly salty Chap Chye, Ayam Buah Keluak, Itek Tim (duck soup with salted vegetables and sour plums), Ayam Goreng Ketumbar (turmeric and coriander fried chicken) and Ngoh Hiang (two types: prawn and liver). Get some extra rice to balance out the strong flavours. 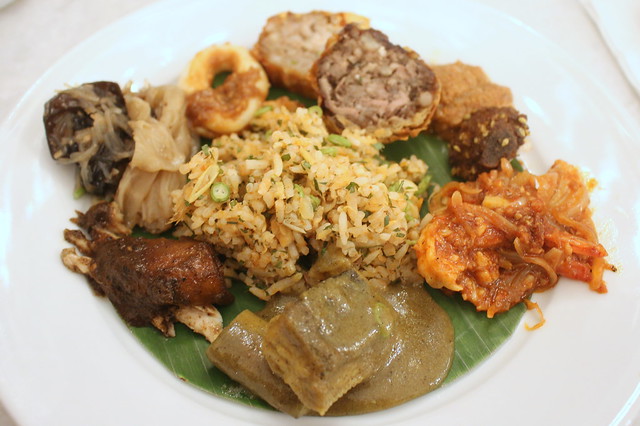 My favourite items from the lot are the Sotong, Stingray, and Ngoh Hiang (prawn). The Ayam Buah Keluak is seriously robust if you like buah keluak. The paste is tightly repacked into the shells (each shell contains the meat of two fruit). And you get such pretty little silver spoons to scoop it out. The nasi ulam is not bad, but I can’t help pining for the version I had long ago elsewhere (not a restaurant). It was drier and had more chopped herbs and dried shrimp. These Tok Panjang dishes are all available on the a la carte menu too. For the unusual dishes, I think it may be better to try fewer at a time, as the intense flavours can get muddled when combined. The set menu as it is has more mainstream items, but may be changed up a bit in the coming weeks. 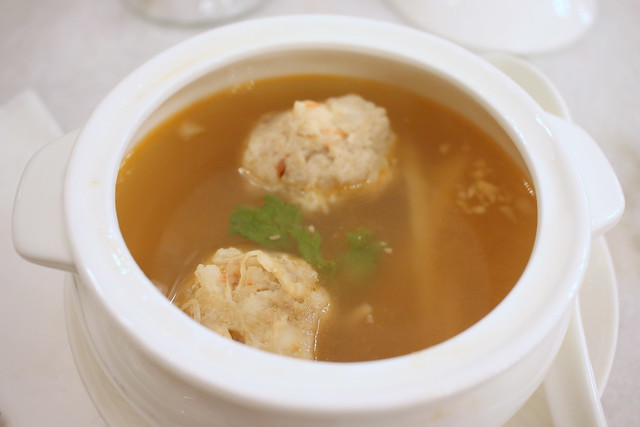 The Bakwan Kepiting (Crabmeat Ball Soup, S$9) has huge meatballs made from crab, pork and prawn in a rich broth with julienned bamboo shoots. Ray uses prawn stock (probably from roasted prawn heads), so there’s a strong seafood aftertaste. It’s also much like a consommé. Ray has some vegetarian items too. 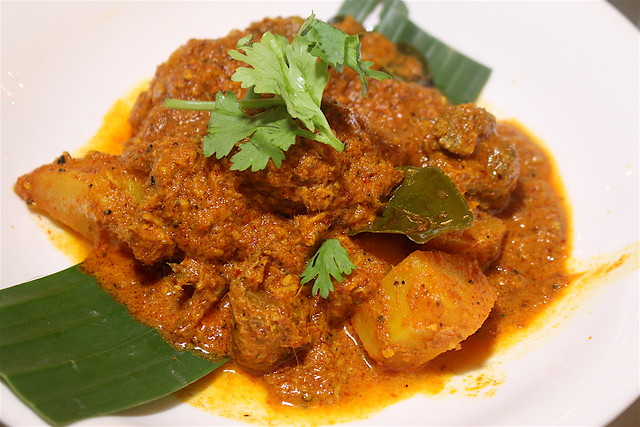 This is “Mutton” Rendang. The mock mutton does have a meat-like texture. The rendang is like a hybrid of Malay rendang with assam – it’s tasty but a little too tangy for a rendang. 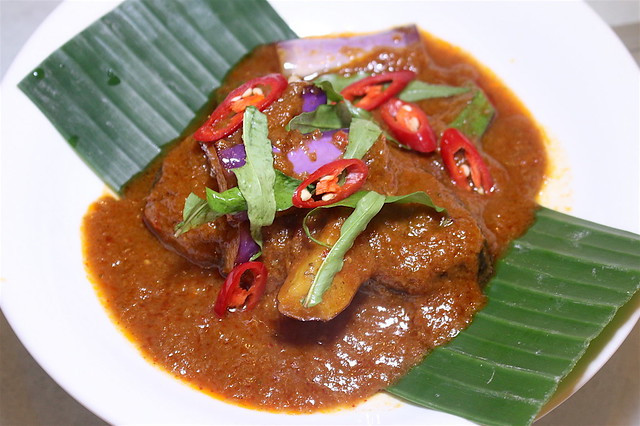 This dish blew our minds! Assam Pedas “Codfish” with a whole codfish steak made from soy dressed in the most intense and complex tamarind gravy ever. This is super SHIOK! Hands down, this was my favourite dish, and Belinda’s too! The good news is, the same addictive sauce is used for fish head, king prawn and other Assam Pedas dishes! This gravy and some rice would make a glorious dinner! 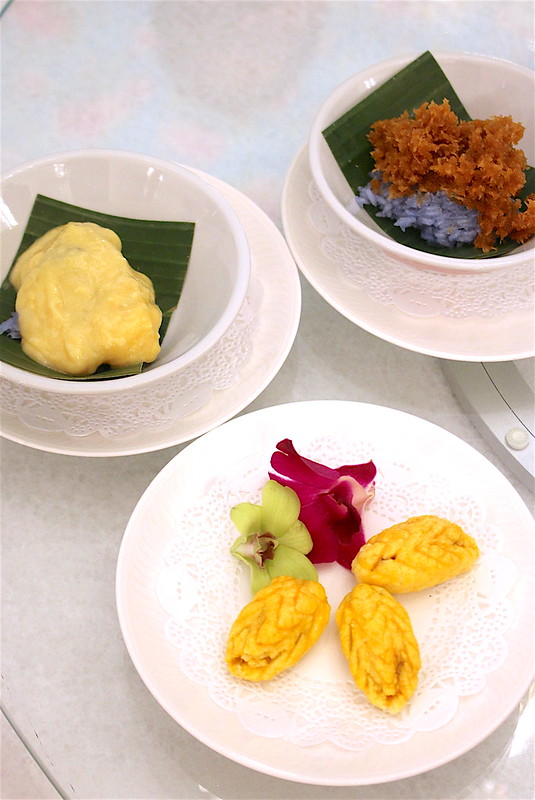 Dessert looked simple but was fabulous. The Pulot Enti Durian (glutinous rice with durian puree) completely stunned us. The durian was simply exquisite; it was so fragrant, refreshing and moreish all at the same time. Ray uses only Malaysian durians, and doesn’t “dilute” them with cheaper variants from elsewhere. And this dessert is only S$5! Oh, and I see you can have the durian puree added to other desserts like Pulot Hitam, Bubur Cha Cha Cha, Bubur Kacang Hijau, and Chendol Melaka too! The Pulot Enti Kelapa (glutinous rice with gula melaka coconut, S$3.50) is also lovely, with a rich topping of shredded coconut. The glutinous rice is stained naturally blue using bunga telang (butterfly-pea flowers). You could also go for the BB’s Kueh Tart Extraordinaire (S$1 each) – pineapple tarts with perfectly crumbly, buttery thin crust. The filling is nice but a little too sweet for me. 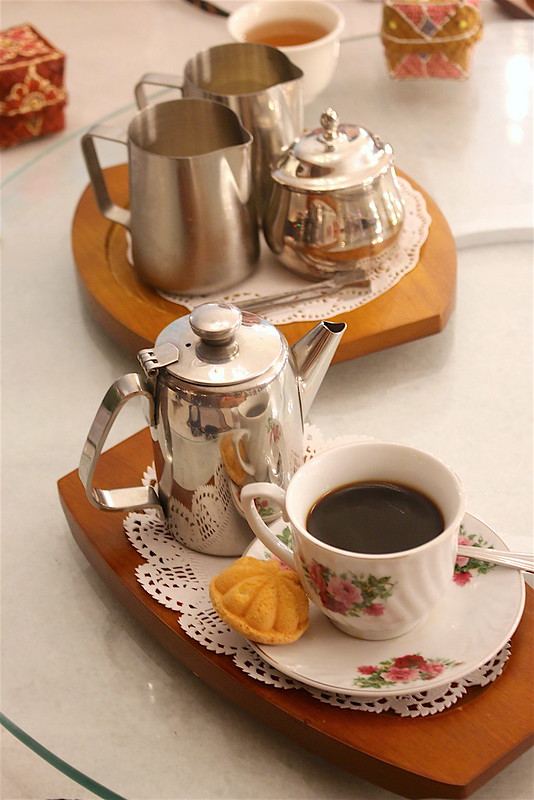 Round off the meal with Malaccan coffee or tea. These are served with a kueh bahulu (a baked sponge-like mini-cake) instead of a cookie, along with jars of sugar, condensed milk and evaporated milk, so you can create your own kopi C, kopi siu dai, and so forth. 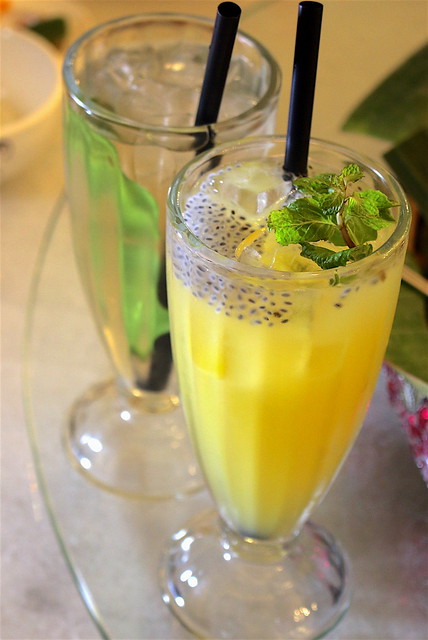 Chilled drinks include Kumquat with biji selaseh (foreground) and Lemongrass/Pandan (background) which is sugar-free and very light. For some people, Peranakan food is an acquired taste. Ray says the uninitiated may be surprised and overwhelmed by the cacophony of intense flavours. On the whole, I like The Peranakan for some dishes, and I know I definitely will be back for the durian dessert. Belinda, my Peranakan expert, also liked some of the dishes, as the familiar tastes swept her back to her childhood. That alone is a good indicator. The Peranakan also offers a six-person degustation menu (S$85 per pax) that has to be ordered in advance. If you’re after the ultimate, book the Chef’s Table which seats eight for an omakase experience (S$188 and S$288 per pax, requires seven days advance notice). They are also planning a high tea set, so watch out for announcements on Facebook. From the photo they shared with us, it does look like a real treat! I see kueh kosui, ayam buah keluak toast, goreng pisang, kueh salat, satay babi pau, sambal prawns, mee siam, and kueh pie tee!
Source: http://www.camemberu.com/2016/07/the-peranakan-closely-authentic-nonya.html